Carlo Scarpa was endearingly called “Professor” and ironically, I have learned a great deal from his teachings, his drawings, and his work. His admiration for how the passage of time and nature are intertwined is to be revered. Perhaps, because he was a Venetian, Scarpa was extremely thoughtful in the study of water, the landscape and ground plane, and it’s influences on architecture.  His study of sunlight and its movement, human circulation patterns, and the subsequent marriage of both is without equal and his passionate embrace of materials and detailing is wholly remarkable. Scarpa scholar, Richard Murphy, RIBA, has lectured that Scarpa “forever looked to turn the everyday into jewelry” and indeed, Scarpa reveled in the design of the seemingly mundane: gates, hinges, and door handles, for example. Like Scarpa, we should strive to remember that excellence in design is without boundaries and even the smallest elements require consideration. 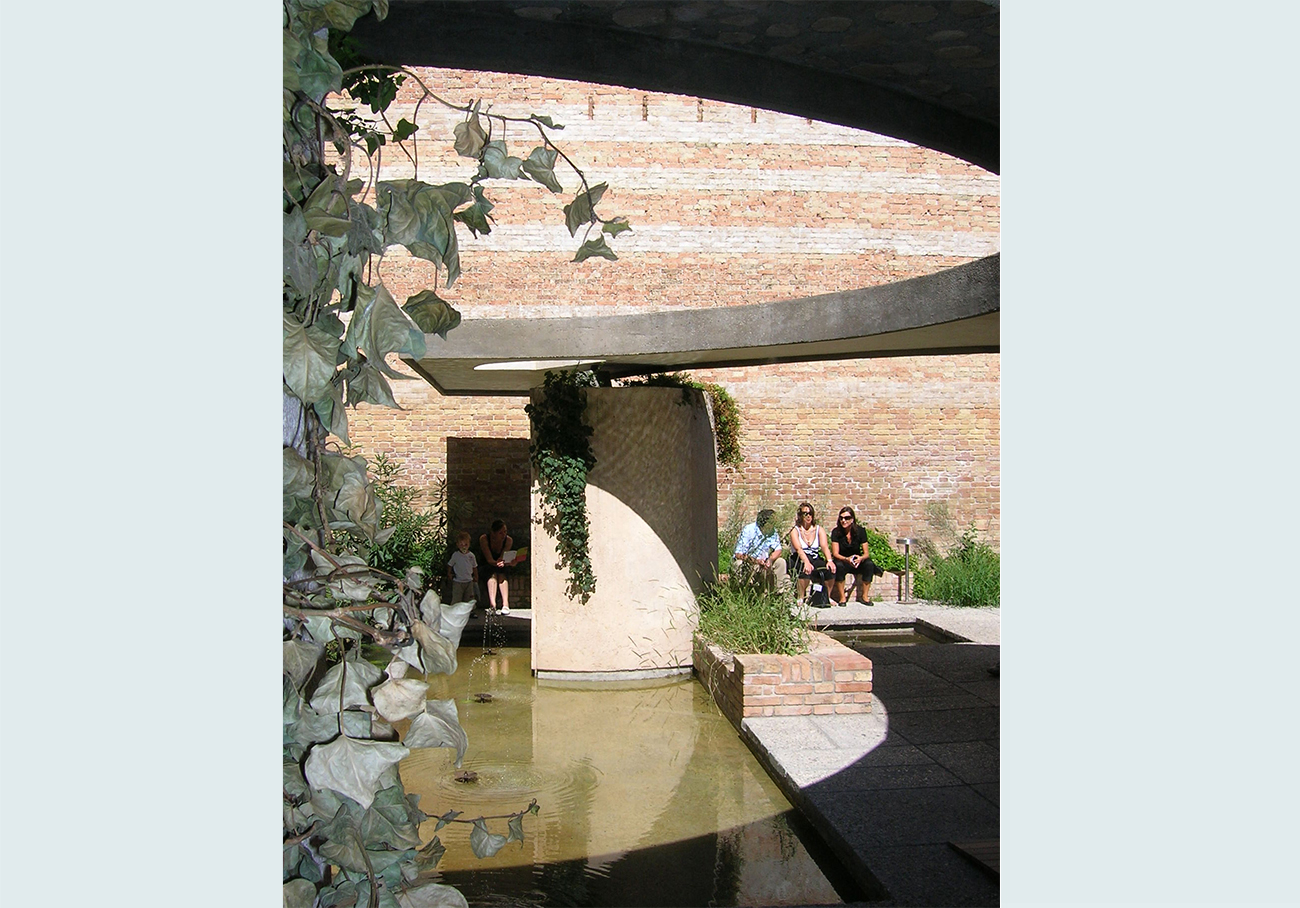 Carlo Scarpa was extremely thoughtful in the study of water, the landscape and ground plane, and it’s influences on architecture.

During college in Rhode Island, I was introduced to the works of Carlo Scarpa by an Italian visiting professor, Dr. Luigi Butera, FAIA. He had worked with Scarpa and was keen on making sure that American architecture students knew of his talent. I was later asked to join a design team, led by Dr. Butera, working on an architectural competition submission for the 1985 Venice Biennale. Our submission won a grand prize and the design team was honored with the Stone Lion Award. The competition experience and the honor of receiving an award fostered a respect for Dr. Butera and made his appreciation of Scarpa much more poignant.

I was hooked! I immediately began to explore and study everything I could on this great master.

Carlo Scarpa was born in Venice, Italy in 1906. He knew at an early age that architecture was his calling. He attended, then graduated from the Academy of Fine Arts in Venice, with the title Professor of Architecture. This would prove to be ironic, as Scarpa refused to take the pro forma examination required by the government after World War II. He was always known to his students, colleagues, associates, and clients as simply “Professor”. To me, this is entirely appropriate and fitting.

Scarpa taught at “Istituto Universitario di Architettura di Venezia” from the 1940’s until his untimely death in 1978. In his teachings and many of his built works, Scarpa engaged a deep sensitivity to the passage or movements of time; be they seasonal or historical. Further, he welcomed “numeracy”, similar to the ‘Rule of Three’ that is based in Venetian culture, into his work. For example, there are 11 letters in his name and this numeric reference appears throughout many of his designs. Scarpa was keenly aware of the power of materials and detailing. Louis Khan deftly observed that Scarpa had an ‘adoration of the joint’ and his influences included Japanese construction methods, Frank Lloyd Wright, and Modernism.

In 2007, I paired with another talented designer and entered an architectural design competition, the 2007 J.O.B. Competition: Reimagining Spaces. We won the grand prize! Our reward was all expense paid trip to Venice and tickets to the Venice Biennale, ironically, 20 years after my college design team won a grand prize at this event. It was here that I saw Scarpa’s work firsthand and realized what an influence on my own work he had, indeed, become.

Scarpa designed many projects and buildings in Italy and throughout Europe, but few were built. These following two thoughtfully completed projects, in my estimation, are among his best: the Venezuelan Pavilion (shown below) at La Biennnale, Venice Italy and the Brion Tomb and Sanctuary in San Vito d’Altivole, Italy. My architectural thinking has been influenced by both projects and I feel they are perfect examples of Scarpa’s timeless design.

The Venezuelan Pavilion.
Often described as “the Olympics of the art world”, The Venice Biennale is a prestigious event for contemporary artists. In 1953, Scarpa was asked to design a permanent national pavilion, still intact today, for the display and presentation of Venezuelan artists. When I studied this Scarpa project, the floor plan sketches revealed three distinct rectangular ‘zones’ or rooms for display and gathering.

Two of the rectangular forms act as enclosed galleries, with the third rectangle creating an outdoor display area. Interior circulation paths, as well as, the approach to the Pavilion and the Main Entry, all exist in and along the interstitial spaces between the rectangular forms. The main, and most prominent, gallery is a simple and dramatic form, and materiality and fenestration patterns are subtle. Tall, slender windows rise from about mid-height of this form and wrap over the building facade creating clerestory lites that draw daylight, breathtakingly into the gallery spaces below.

I was awestruck by this wonderful example of Scarpa’s embrace of natural light, and its timely movement. On the inside of the pavilion, the gallery spaces are divided by movable, pivoting panels, allowing for flexible levels of enclosure and different space configuration. I find myself drawn to this principle of flexibility and kinetic architecture and attempt to employ it in my designs.

Rendering of “One Man Ski Haus” by Dean Ober, inspired by Carlo Scarpa

Brion Tomb and Sanctuary at San Vito d’Altivole.
Scarpa designed several discrete and complementary built elements comprising the Brion family burial site: a sloped concrete wall, a small meditation chapel, two covered burial areas- the arcosolium for the patrons and another for family members. In the design of the landscape, he laid out a dense grove of cypress trees, and a private meditation/viewing pavilion, separated from the main prato or lawn, by a heavily vegetated reflecting pool. The “viewing device” of the chapel suggests a ‘vesica piscis’, or fish-shaped lens that is based on geometry and numeric principles, as mentioned earlier. A ‘water’ gate to a private mediation pavilion employs a craftily designed and detailed pulley system comprised of 11 individual ‘wheels’. Remember Scarpa’s clever use of the number 11 in his work?

Throughout the entire sanctuary there is a studied reveal of the landscape which, coupled with the materiality and building forms, conveys a sense of peace and solemnity that the respected family deserves. It is the blending of the natural and the built environment that makes this tranquil Scarpa project my favorite.

Scarpa himself is entombed at Brion. Again, in an ironic twist of fate, Scarpa died after falling down a flight of concrete stairs while in Sendai, Japan. He is buried in an isolated corner of the cemetery, in a tomb of his own design, standing up and wrapped in linen sheets in the style of a medieval knight. Even in death Scarpa continues to impress.

So, why Carlo Scarpa? His designs have a real 20th century appeal. It is a simple and rich language of a broad range of influences, from the Dutch and De Stijl movement, to the builders in Japan, and Venetian culture. Scarpa speaks his language, one of asymmetry, the planar, and tectonic, masterfully.

The famed architect, Philip Johnson, stated that “one cannot, not know history”. Take this to heart as I have. The architecture of the past can reveal a beauty and simplicity that is often overlooked today. His collective works can teach us much about exquisite detailing, simple materials, and a respect for the landscape.

I feel that it is indeed regrettable that for most, Carlo Scarpa, a design genius, remains unknown and underappreciated. This will forever make him, in my opinion, the ‘Forgotten Master’.

Rendering below is “The Bus Stop” by Dean Ober, inspired by Carlo Scarpa